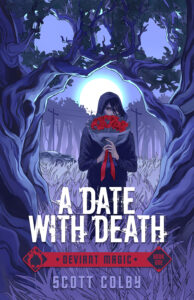 Life takes on new meaning in a town where no one can die.

When twenty-something Kevin Felton loses his job and moves back in with his mother, he assumes life can’t possibly get any worse. He used to be somebody at a big time company—now he’s just another nobody with no direction and nothing to do but get drunk and fantasize over the strange blue woman that lives in his dreams. Little does he know, there’s more to his world than he ever imagined, and he’s about to be thrown headfirst into a particularly deadly kind of fantasy. Things start to look up when Kevin stumbles into a wild romance with the woman he thought was just a dream, a water nymph with a magical and mysterious past. There’s just one problem: his new lover left a fiancé at the altar, and that man just happens to be Death himself. Angry and depressed, the reaper shirks his responsibilities to scour the town for the man who wronged him—leaving the newly deceased free to come right back to life. In a desperate attempt to save himself, Kevin teams up with Driff, an elven secret agent with questionable loyalties, and Ren, a longtime friend who knows more than he’s letting on. Together, the trio embarks on a wild scheme to befriend the reaper and hook him up with someone new before Kevin’s role in events comes to light and Death exacts whatever horrible punishment he has in mind.

Available now in ebook and paperback via Outland Entertainment.