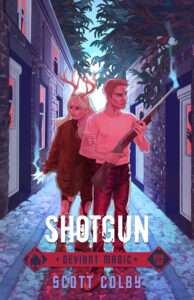 Unlikely companions team up against a globe-spanning conspiracy masterminded by the devious Witch.

Mild-mannered family man Roger Brooks is sucked into a hidden subculture of magic and fairy creatures when he discovers the world’s most powerful magic in his silverware drawer. Whisked away to a city of sorcery and intrigue, Roger’s faced with unraveling the mystery behind a series of attacks that could only be perpetrated by an inside agent. Can Roger track down the traitor, or are his new duties as the world’s greatest champion too much for any human to bare?

Meanwhile, in Detroit, Talora awakens on a park bench with no memory and no clue if the antlers growing out of her forehead are supposed to be there. Taken under the wing of the mysterious Witch, Talora is introduced to the darker side of the magical world as she searches out clues to her missing past while working for a shadowy cabal of demons intent on ruling the planet.

When our two heroes’ paths finally cross and the Witch’s villainous plan explodes around them, they’ll have to learn to work together—or die trying.